I’ve been struggling for decades trying to understand what this enormous object was that we witnessed in Mississauga, Ontario, Canada. Circa 1980. (Read more here).

The most common theory I found, from the UFO Believers is that we’re being visited by aliens from other stars. I too got sucked in at first. However, as the years went by with a lot of reading and researching, I’ve concluded that the ETI hypothesis might only represent a small fraction of the phenomenon on the whole. I surmise we’re seeing and detecting only the tip of the iceberg of this Enigma while most of it is far more profound and unexpected. Thinking outside the box, we have to entertain the idea of the “Ultraterrestrial or Interdimensional Hypothesis”.

The Interdimensional hypothesis (IDH or IH), is an idea advanced by UFOlogists such as Jacques Vallée that says Unidentified Aerial Phenomenon and related events involve visitations from other “realities” or “dimensions” that coexist separately alongside our own. It is an alternative to the Extraterrestrial Hypothesis (ETH). IDH also holds that UAPs are a modern manifestation of a phenomenon that has occurred throughout recorded human history, which in prior ages were ascribed to mythological or supernatural creatures. 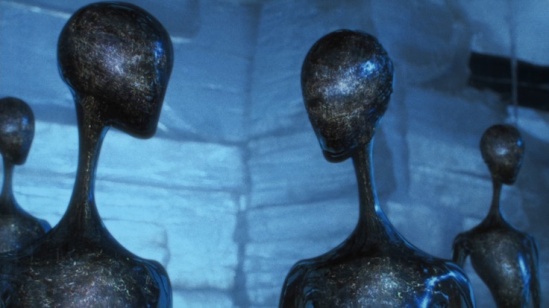 Although ETH has remained the predominant explanation for UAPs by UFOlogists, some UFOlogists have abandoned it in favor of IDH. Paranormal researcher Brad Steiger wrote that “we are dealing with a multidimensional para-physical phenomenon that is largely indigenous to planet Earth”. Other UFOlogists, such as John Ankerberg and John Weldon, advocate IDH because it fits the explanation of UAPs as a spiritualistic phenomenon. Commenting on the disparity between the ETH and the accounts that people have made of UAP encounters, Ankerberg and Weldon wrote, “the UFO phenomenon simply does not behave like Extraterrestrial visitors”.

The development of IDH as an alternative to ETH increased in the 1970s and 1980s with the publication of books by Vallée and J. Allen Hynek. In 1975, Vallée and Hynek advocated the hypothesis in The Edge of Reality: A Progress Report on Unidentified Aerial Phenomenon and further, in Vallée’s 1979 book Messengers of Deception: UFO Contacts and Cults.

Some UAP proponents accepted IDH because the distance between stars makes interstellar travel impractical using “conventional means” and nobody had demonstrated an anti-gravity or faster-than-light travel hypothesis that could explain Extraterrestrial machines. With IDH, it is unnecessary to explain any propulsion method because the IDH holds that UAPs are not spacecraft, but rather devices that travel between time and/or different realities.

One advantage of IDH is its ability to explain the apparent ability of UAPs to appear and disappear from sight and radar; this is explained as the UAP entering and leaving our dimension (“materializing” and “dematerializing”). Moreover, if the other dimension is slightly more advanced than ours, or is our own future, this would explain the UAPs’ tendency to represent near future technologies (airships in the 1890s, rockets and supersonic travel in the 1940s, etc.).

UFOlogist Philip Imbrogno talked about his theory of Ultraterrestrials and how it constitutes a radical new quantum approach to understanding the contact phenomenon. In contrast to “Extraterrestrial,” which he said has become synonymous with simply aliens from another planet, Imbrogno defined “Ultraterrestrial” as “anything outside of our physical reality” and, thus, encompasses entities from other dimensions and parallel worlds. He explained that his work aims to “combine string theory and quantum physics into the paranormal.” By doing this, Imbrogno said, the enigmatic nature of the paranormal becomes more palatable as it can be viewed in the context of these emerging sciences.

Go here for Part One

My Official UAP Report Including My Drawings

I’ve Seen Through The Looking Glass, Outside The Fishbowl